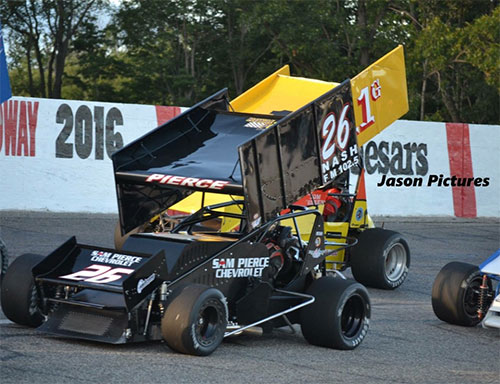 Toledo winner Ryan Gillenwater controlled the early stages of the 40-lap event with Doug Dietsch and two-time winner this season Bobby Santos close behind with Geoff Kaiser in fourth spot. At the 10-lap mark, Pierce advanced to fifth spot and was challenging Kaiser for fourth.

On lap 15, Pierce grabbed fourth from Kaiser after the two veteran racers had a spirited battle on the tight quarter-mile oval. Three laps later Santos drove into second position with Pierce passing Santos on lap 22 to advance to the runner-up position. Gillenwater continued to be shown as the leader and held a sizeable margin over Pierce and Santos.

Pierce was closing the margin to Gillenwater and with 10 laps to go, Gillenwater’s lead shrank to five car lengths as they were working through some lapped traffice. With three laps Pierce dove under Gillenwater to take the lead and then drove to the victory. Gillenwater finished in second with Santos completing the podium. Fourth was Kaiser with Jason Blonde rounding out the top five.