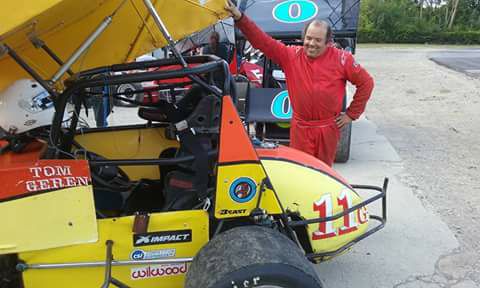 In our continuing series of the AVBBSS drivers we feature Tom Geren Jr.

Tom was born November of 1973, and currently resides in Ohio with his dogs.  He is employed with Zimmark, which is a fluid management company, as a site supervisor.

Tom is the driver and owner of the his 410ci Chevy powered pavement sprint car.  The 11 rides on a Hawk Chassis, which seems to work very well for both winged and non-winged competition.

Other than Tom’s own wallet, he is sponsored by Gary Thornton Insurance of Bryan Ohio.  Tom runs on a small crew of his dad Tom Geren Sr, and Dan Casper.  Tom also wants to thank his Mom Judy.

Tom has 27 years in racing.  His first 10 running dirt modified.  He then moved to pavement sprints, starting with the  305 sprints, before settling into the 410 with HOSS series then to Auto Value Super Sprints.