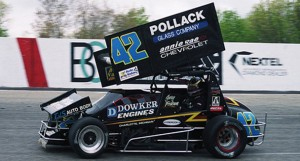 (July 6, 2002) – The Delaware Speedway in Delaware Ontario was host to the Auto Value/Bumper to Bumper Super Sprint Series Friday evening. The very excited driver in victory lane was Holt MI driver Gary Fedewa. The defending champion of the AVSS was also the victor in last year’s inaugural race at the beautiful ½ mile facility.

The day started at Delaware with 24 AVSS teams checking in to the pits on a sweltering day. The hot laps were quickly completed and it looked like the AVSS track record of 16.43 of Chris Hayes from last season would be in jeopardy. This was quickly proven, as Mooresville IN racer Rick Baker became the new sprint record holder with a blazing lap of 16.051. The new point leader Bill Tyler of Parma MI was second quick at 16.394 and Mike Ling of Mt Brydges Ontario was third fast at 16.431.

One of the reasons Bill Tyler is the new driver point’s leader is Tom Fedewa who was the leader had difficulties at the border with Canadian custom’s and could not enter the country to race. An unfortunate circumstance and a very tough pill to swallow for the entire Katz racing team. The Leslie MI driver is expected to return to competition at Kinross on the 19th of July.

The feature was lined up in front of the huge Delaware Speedway crowd and the on track introductions got the fans pumped for 30 exciting laps of AVSS action. The three wide salute was given the expected standing ovation and then it was time for Chris Hayes and Gary Fedewa to lead the field to the green. The start was fast and furious and G.Fedewa took the early lead.

The battle was for second as Jimmy McCune challenged Hayes and took the second spot on lap 13. The race was on for the lead as McCune was closing on G.Fedewa as the laps wound down. The lapped traffic played a part in the race as the top two cars worked their way through and McCune actually got along side with Fedewa on a couple of occasions. The yellow was thrown for the first of two times on lap 27 when Gary Sherman slid in something in turn two and the race was slowed. An amazing turn of events happened next as McCune running second tried to adjust his wing under caution and something happened to the wing and was hanging up in the air. The driver tried to make repairs before going green and did restart, but had to quickly pull into the pit area. The problem with McCune’s car caused the cars to bunch up and all the AVSS drivers in avoiding a large wreck did a great job. The car of Kevin Newton was the only car to spin in turn one.

The race was restarted with Gary Fedewa leading the race back to the green and held off Hayes for his second win of the year and his second consecutive at Delaware Speedway. The driver of the Annie Rae Chevrolet, Dowker Engines, Pollack Glass number 42 thanked the excited Canadian crowd and was very happy to get the race car in victory lane again.

The top ten finishers were Gary Fedewa, Chris Hayes, Mike Ling, Dorman Snyder, Tim Cox, Bill Tyler, Hank Lower, Rick Baker, Jeff Bloom and Dennis Craft. There was an unfortunate incident in hot laps when two time winner Jason Blonde blew his motor and did race in Tom Fedewa’s car during the night, but reports are his season could be finished with AVSS.

The Suspension Spring Specialist’s driver of the race was Brian Lay of Toledo OH . The entire AVSS staff would like to thank everyone involved at Delaware with making this race a huge success again. The official website of AVSS is supersprints.com.