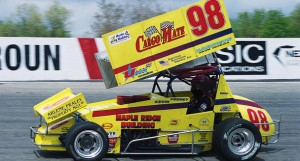 SALEM, Ind. (September 28, 2002) – The Salem Speedway in Salem IN was host to the final AVSS race of the 2002 season. Oxford MI racer Kevin Feeney, winning his third AVSS feature of the season captured the incredible show.

The other bit of excitement during Saturday nights races was the amazing points battle for the AVSS drivers points championship and winning his first ever AVSS championship was Park City IL driver Tim Cox.

The day began with 29 AVSS teams checking into the pits at the legendary oval in southern Indiana. The drama started for the championship chase when current AVSS point leader Bill Tyler of Parma MI had motor problems with his famous 24 car. The only good luck with this situation was Tyler was able to acquire another ride for the evening before qualifications when Troy Underwood was nice enough to loan Tyler his sprintcar. The qualifying then started for 27 remaining cars and the world record time of 14.692 was to be in definite jeopardy. Feeney made that record set last year and he was not to be denied in keeping that track record with a new Salem Speedway world record time of 14.499! This averages out to over 137.7 miles per hour. This incredible accomplishment was honored with a $200.00 bonus from Hamilton Trucking for setting fast time and breaking the existing track record. The second quickest racer was last years feature winner Mike Ling of Mt Brydges Ont. with a 14.711 and Bangor MI veteran Jeff Bloom was third fastest at 14.731. In all there were nine drivers under the magical 15-second range.

The day started with Tyler holding a four point lead over Cox and before the feature pushed off the two great drivers were tied for the 2002 national championship. The 30 lap main event was pushed off with all 20 starters giving the gigantic Salem crowd the traditional three wide AVSS salute. Then it was time to get down to business with Gary Fedewa and Stepke on the front row. The question was would the great drivers of the AVSS be able to top last years feature that went nonstop green to checkered in under nine minutes. It was quickly answered as this year’s feature was run exactly the same way as the entire 30 lapper was completed in a record eight-minute time!

The race went green with Stepke taking off and running from the field and leading the first 17 laps. The fast qualifier Feeney started sixth and was quickly working his way through the feature lineup. The pass for the lead was a brilliant move by Feeney diving under Stepke and taking the lead and eventual win. It however was not that easy as third fast timer Bloom was on the move and challenging Feeney for the top spot. The racer with thousands of laps of experience on the highbanked track made his move and for a short time took the lead from Feeney on lap 28. The driver of the Hanks Motorsports car was able to regain the lead from Bloom with a little help from some lapped traffic that came into play in the final five laps. The feature winner Feeney crossed the finish line a few feet in front of Bloom to take his third AVSS feature of the season.

The winner was so excited he climbed up on the top wing of his car and saluted the amazed Salem crowd. The driver thanked car owners Jim and Nancy Hanks, Cargomate Trailers, Maple Ridge Builders and all his crewmembers. The Dowker chassis worked flawlessly said Feeney in the Salem winners circle. The rest of the top ten finishers were Bloom second, Stepke third, G.Fedewa fourth, Ling fifth, Craft sixth, Tom Fedewa seventh, Hayes eighth, Cox ninth and Kevin Newton tenth.

The championship was decided by a slim five point margin when Cox finished ninth and Tyler took 14th in that borrowed car. It is rather incredible to think that after 22 races from mid-April until the end of September so few points would decide that the driver’s championship. The 2001 AVSS rookie of the year was interviewed in the Salem winners circle and thanked his car owners Don and Brenda Lambert and Bud Whitacre for all the support. The Dynamite chassis was able to capture the 2002 AVSS driver’s championship and Cox thanked Hugh Cook, his wife Cheryl and his two children Tracy and Jason. The entire AVSS drivers and car owners’ point run down will be released early next week.

In another incredible battle the car owner’s championship was won by Battle Creek MI car owner Mike Katz. The 20 car that Katz owns was piloted for all but two races by Leslie MI driver Tom Fedewa and the long time supporter of the AVSS was able to capture the owners championship by a slim nine point margin over the Lambert/Whitacre entry. The entire Katz well drilling team is to be congratulated in taking the well-deserved honors.

The Suspension Spring Specialist driver of the race was George Gustafson of Potterville MI. The official website of the AVSS is www.supersprints.com. There will be an open fall meeting for all issues pertaining to the 2003 AVSS season. It is Sunday October 13 at 1:00 PM at the Robin’s Nest in Battle Creek MI. The public is invited to this meeting and potential new teams are strongly encouraged to attend. The number for directions to the meeting is 616-672-7472 or for more information.

The 2002 AVSS champions banquet is Saturday night November 2 at the Holiday INN South convention center in Lansing MI. The public is welcomed to attend this great celebration of the 2002 AVSS season. The ticket information number is 517-784-7982.

The entire AVSS staff would like to thank Owen Thompson, Richard Deaton and the great group of associates at Salem Speedway for another incredible night. The AVSS family would also like to thank Brian Julian and his great crew for the incredible barbecue he hosted Friday night at the track. The Auto Value/Bumper to Bumper Super Sprints will be back bigger and better than ever in 2003, so keep watching for news during the entire off season.