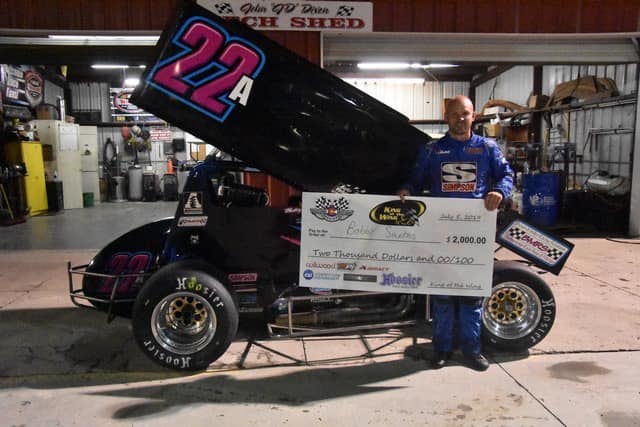 The KOTW and AVBBSS opening night Colorado National Speedway was a late one but well worth the wait of the showers that snuck over the Rocky Mountains.

Before the rain Eric Humpries picked up his second quick time of the year running a 13.763 on the new asphalt 3/8 mile track in the Hamilton Trucking Qualifying. He was closely followed by Bobby Santos III with a 13.807 and Chris Muhler brining in a 14.135

The ProThings Apparel first heat had Jaren Mott on the pole, but it was Tristan Spiers who started P2 that lead throughout the 8 lap race, beating out Austin Carter, and Chris Musler.

The second heat had Bryan Gossel on the pole, and he never looked back from the green to checker flag winning the Wix Filter heat 2 race followed by Kyle Bergener and Bobby Santos III.

After a 2 hour rain delay and a further delay after a 14 car Legend Car accident on the track, the Sprints took the field for the AVBBSS/Hoosier Tires main event at Colorado National Speedway Midsummer Meltdown!!

Brian Gossel started on the pole and maintained that lead through lap 5 caution where Bobby Santos III came from a third place to the lead of lap 6 on the restart. Santos never looked back as he rocketed to the 30 lap feature win, his third of the year in as many races in the 2019 season.

The points race for the winged races of the 2019 season is led by Santos, with Humpries closely following as the two are way ahead of the remaining competitors, as these two have attended all three races thus far this season.

Aaron Pierce maintains his lead in the Non-winged series, closely beating out Santos thus far in the 2019 season.

It will be interesting to see who takes tonight’s 2nd race at CNS.