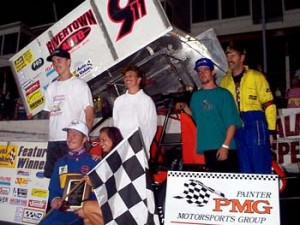 KALAMAZOO, Mich. (July 14, 1999) –  Sarah Fisher and South Africa’s Quintin Saayman won the NAMARS Midget and Sprint Car features respectively at the 1999 Wolverine Mid Season Nationals at the Kalamazoo Speedway on Wednesday night. Fisher took the lead from Gene Lee Gibson on lap eight, and never looked back to win her fourth career midget feature in just a handful of starts. Saayman was able to wrestle the lead away from dirt racing standout Brett Mann on lap five of the sprint car feature, and was able to hold off Tom and Gary Fedewa during the 50-Lap feature that went green to checkered.

Gibson and Fisher were on the pole for the 50-Lap feature for the NAMARS, ARCA, and UMARA co-sanctioned event. Gibson jumped out to the early lead followed closely by Fisher. The driver on the move early on was 1998 NAMARS Champion Matt Westfall. The Ohio native started the event in the sixth position and quickly moved settled into the fourth position on lap three, and took second from AJ Fike just one lap later. Fisher then started to make a move under Gibson at the same moment, but the caution flag came out for a spin by Tom Fedewa, who was the only driver who ran both the midget and sprint car events.

On the restart Fisher applied a lot of pressure to the veteran Gibson, jumping out to the high side of the racetrack to pull even. Two laps later Fisher had the lead and opened up a sizable advantage. Westfall quickly went backward at almost the same speed he was moving up during the early stages of the event. The driver making the best move through the pack during the middle stages of the event was A.J. Davis. Davis had started in the last row of the 22 car field, and by lap 18 had moved up into the top five using the high line around the world’s fastest 3/8 mile paved oval.

The caution flag came out again on lap 19 for a spin by J.D. Turner, and on lap 29 for Jim Hettinger. Fisher both times was able to pull away from Gibson on the restart. Fisher walked away from the field and was lapping cars a torrid pace until the caution came out when Clay Klepper’s car experienced mechanical troubles on the backstretch. This set up a two-lap shootout to the end with Gibson right on her heals. Fisher didn’t buckle under the pressure and pulled away one last time to hold on for the victory. Gibson, Davis, David Steele, and Brian Gerster rounded out the top five.

Westfall was the fast qualifier over the 46-car field with a lap of 12.862 seconds around the 3/8 mile oval. Klepper, David Thompson, AJ Fike, and Gibson won the heat races, while Davis and Hettinger won the B-Main events.

The 10-car inversion for the sprint car feature put Brett Mann in the Untied Expressline’s pavement entry and Saayman on the front row for the 50-Lap feature. Mann took the lead for the opening circuit with Saayman pressuring him. Mann led the first five circuits until Saayman pulled along side and raced side by side for several laps until Saayman was able to pull ahead.

While Quintan was attempting to overtake slower traffic, Tom Fedewa was moving through the field from deep in the pack. Fedewa, who is a veteran of many late model races at Kalamazoo, quickly worked past Mann into second and began to chase Saayman. Fedewa quickly caught up to Quintan in the lapped traffic, but could not make the pass.

As the race wore on through the middle stages, traffic was getting heavier. This allowed Gary Fedewa to slowly pick off cars one at a time, pacing himself to save the tires. The elder Fedewa soon caught his son to create a three-car battle for the top position. Saayman then was slowed while trying to lap his father Edward, and Tom had a look down low for the lead. Quintan soon disposed of his Dad, and then made a nifty move to split Hank Lower and another lapped car to put some distance between himself and second place. Saayman then held on to win the nonstop 50-Lap event over Tom Fedewa, Gary Fedewa, Kevin Feeney, and Scott Seaton.

Curt Shumaker set fast time with a lap of 11.223 seconds, just a few ticks off the track record set by Brett Mann last season. For much of the session 71-year-old Benny Rapp had quick time until Shumaker qualified. The crowd went wild when Rapp turned in his 11.268-second lap that ended up being second quick, and the third fastest lap ever in a sprint car at Kalamazoo. Rick Toncray, Bill Tyler, and Feeney won the heat races, while Saayman won the B-Main event.