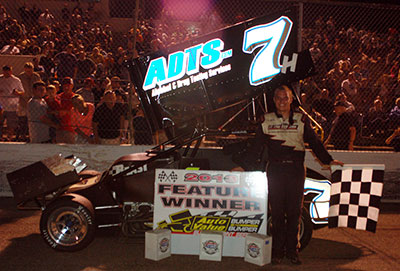 “Dixie is a new favorite of mine and it was great to see a really good crowd ,” said an excited Jo Jo Helberg after earning his second career Auto Value Super Series victory. “Thanks my dad, girlfriend and Jerrod for sticking me after a poor qualifying effort and a trying heat race were our nose wing collapsed. I didn’t see him (Joe Swanson) at all. My dad was giving me signals and he was pretty fast. The short runs worked great for us. It allowed me to cool the tires down. I was able to get through 1-2 really good, but it was pushing really bad in 4. Figured if I could arch it in there, it could save both lines where he couldn’t get by me.”

The 20-car field took the green flag and before the competition of lap one, sixth place starter Jimmy McCune made contact with the outside wall between turns 1-2. The Toledo, Ohio, veteran was unable to restart his BIoBased.US N. 88. That caution erased a great start by Helberg.

On a complete restart, Helberg once again charged into the lead in his No. 7 ADTS.com/PitStopUSA.com car. Inside front-row starter Ryan Gillenwater settled into second spot. At the sixth go-around Swanson was glued to the bumper of Gillenwater in the battle for runner-up honors and then made the pass to take second.

The caution waved at lap nine with Helberg showing the way over Swanson, Gillenwater, Bill Tyler and Troy DeCaire completing the top five.

On the restart, Davey Hamilton Jr. lost an engine and came to a stop in turn 2. The lengthy delay forced series officials to bring out the red flag and they allowed teams to refuel. That caution was a huge break for DeCaire, who lost four positions on that restart.

During the next stretch, Helberg continued to show the pace and Swanson was able to remain within striking distance while they worked through some lap traffic. Then just past halfway the yellow waved for a spinning Cody Hoover at the bottom of turn 2. At that point, Helberg was leading with Swanson, DeCaire, Tyler and Jason Blonde filling out the top five.

The second half of the event the yellow waved for a hard crash by Jim Swain in turn 4 and Bill Tyler made contact with the turn 1 wall. Both drivers were ok.

At the finish, Helberg fended off challenges from Swanson to grab the victory at the .40-mile oval.

“We had a good car, I just wasn’t able to get a long enough green flag run to get by him (Helberg), said runner-up Joe Swanson. “I felt we had a better car, when his tires would get hot he would start pushing.”