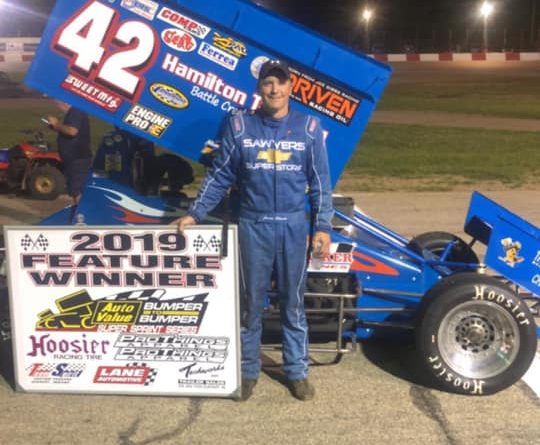 Practice sessions went off good as the drivers dialed their cars in, and Aaron Pierce and crew did the best when they captured the Hamilton Trucking fast qualifier with a 11.637. Joe Liguoriand Geoff Kaiser are second and third respectfully in the qualifications.

In the ProThings Apparel Heat 1 Travis Welpott lead the field to the green flag and never looked back as he cruised to victory completing 8 laps to the checker in 1 minute and 43 seconds. Christian Koehler, Jason Blonde, Pierce, Derek Snyder, Kaiser, and Joey Irwin completed the heat finish, all on the lead lap.

The ADT Tools Heat 2 had Jim Payne on the pole with Tom Geren beside him. Payne tried his signature start, but today, he wasn’t very successful at keeping his lead Liguori and Chris Jagger were able to overcome him in the first lap. But it was Chris Neuenschwander was the one who came from 4th to 1st, never looking back to claim the victory in 1 minute 39 seconds. The rest of the field was Liguori, Jagger, Jeff Bloom, Geren, and Payne.

With an inversion of 6 drawn by Pierce, Neuenschwander, and Blonde were to lead the feature to the green flag. Neuenschwander held that lead the first 27 laps until his wing collapsed causing him to spin out in turn 4 forcing a three lap shoot out. On the green Blonde took the lead with Pierce close behind trying to take the lead, going both high and low on Blonde, but unable to get around him, finishing just 0.163 of a second behind Blonde. Bloom, Liguori and Snyder completes the top five for an exciting night at New Paris Speedway.