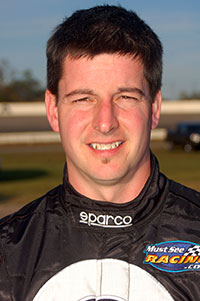 FREMONT, Ind. (September 2, 2013) – The final event for the 2013 Hoosier Outlaw Super Series (HOSS) at Angola (IN) Motorsport Speedway took place on Sunday night, September 1. Aaron Pierce started off by taking down the old track record of 12.008, set by Cameron Dodson several years ago, with a first ever 11 second lap at the speedway. With an official time of 11.899. Pierce chose to take the tracks challenge and take the tail of the feature, after a coin toss decided if he was getting a $500 or $1000 bonus to win.

The feature lined up with Jason Blonde and Jimmy McCune on the front row. McCune took the lead on the first lap and held on with no yellows for the entire feature event. McCune was followed by Jo Jo Helberg, Jacob Wilson, Joe Swanson and Tyler Roahrig for the top five.

The championship chase came to a close with Joe Swanson coming out on top. Second place was Tim Cox with Geoff Kaiser in third position. Jerry Caryer and Tom Green completed the top five.