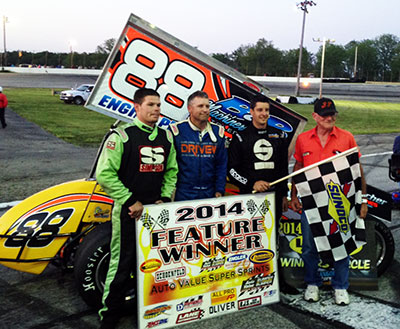 ANGOLA, Ind. (June 1, 2014) – Ohio’s Jimmy McCune got to the inside of leader Jason Blonde on lap eight and then drove away from this competition to win the Auto Value Bumper to Bumper Super Sprints season opener at Angola Motorsport Speedway on Saturday, May 31.

Blonde finished in second position, 3.930 seconds behind McCune. Third was Joe Swanson with Chris Neuenschwander and Jacob Wilson rounding out the top-five finishers.

“It is awesome to win at Angola on Hank Lower night. This track has always been special to me. I like the small high-banked racetracks,” said McCune. “The night didn’t start off that well after some issues with the racecar. My guys busted their tails and really came together and we were able to qualify sixth and be in a great spot with the inversion.”

McCune used patience in the early stages of the 30-lap event. “I didn’t get a good line on initial start, but was tracking Jason really good. After that caution, I started using the high line in 1-2 and the car really hooked up and used the low line in 3-4. I was able to put the pressure on Jason,” added McCune, who scored his seventh series victory.

At the drop of the green flag, five-time series champion Jason Blonde grabbed the first position after a spirited battle with McCune, the most recent winner at Angola. In the opening laps, McCune stayed glued to rear of Blonde while Neuenschwander was looking to make a move on McCune for the second spot.

The only yellow flew on lap four when Ryan Gillenwater spun on lap 2 while attempting to make a pass on Jacob Wilson for fourth spot.

When racing resumed, McCune applied pressure to Blonde for the lead and completed the race-winning pass on the eighth circuit. Once he moved into the first position, he was then able to edge away from his competition. By the conclusion of the 30-lap lap, “Salute To A Legend – Hurryin’ Hank Lower”, McCune had lapped all but the top six-finishers.

As McCune was working through the back portion of the field, a great battle took place from second through fifth with Blonde, Neuenschwander, Joe Swanson and Wilson. In the final two circuits, Swanson was able to squeeze under Neuenschwander in turn 2 to grab the third finishing position. Neuenschwander and Wilson rounded out the top five.