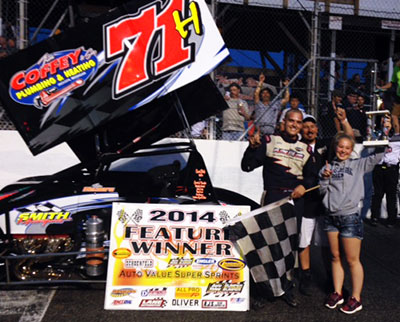 KALAMAZOO, Mich. (June 7, 2014) – Jo Jo Helberg won the 40-lap feature at Kalamazoo (MI) Speedway in the second event of the season for the Auto Value Bumper to Bumper Super Sprints. Helberg, who started in eighth position, passed Joe Swanson with 10 laps remaining and then drove to his second consecutive victory at the .375-mile oval.

“I felt like tire was going down, luckily we had a yellow to allow the tires to cool. I learned the bottom was working really well for me after about spinning out running the top. Everybody kept leaving the bottom lane open and if I could nose it under them, could complete the pass,” said Helberg. “It feels really good to get the win tonight. Last year was going really great and then had a rough ending and had a tough start to this year. Tonight is the start of getting things turned around,” added Helberg.

After an inversion of the top eight qualifiers, the 40-lap feature began with Teddy Alberts and Kevin Feeney leading the 16-car field to the green flag. Feeney got the jump using the outside lane and paced the opening laps of the action-packed event.

Swanson, who started in fourth position, took the top spot on lap three with Hamilton started to apply pressure on Feeney for the runner-up spot. At the seven lap mark, Swanson led Feeney, Hamilton with Byrne running fourth and Helberg up to fifth.

Feeney then brushed the outside wall which allowed Hamilton to power by on the inside with Helberg moving to third a few laps later. A fierce battle then developed from fourth through seventh between Feeney, Cody Gallogly, Jason Blonde and Byrne.

At the halfway mark the top three of Swanson, Hamilton and Helberg were running in tight formation as they were working through lapped traffic. Then Hamilton spun exiting turn 4 to bring out the yellow flag on lap 24.

The green flag re-appeared with 16 laps remaining with Swanson leading Helberg and Feeney to complete the top three. The other lead lap cars included Gallogly, Blonde, Byrne and Hamilton Jr., the final car on the lead lap.

With 10 laps remaining Helberg was able to get around Swanson for the lead as Hamilton Jr. was charging through the field. At the finish, Helberg earned his first season victory over Swanson with Hamilton Jr., Feeney and Byrne filling out the top five.