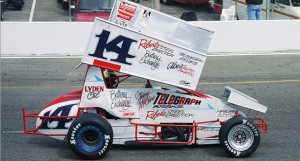 MADISON, Wis. (June 7, 2002) – The first ever visit to Wisconsin was a huge success for the Auto Value/Bumper to Bumper Super Sprint Series and the driver visiting Madison International’s victory lane was Sylvania OH racer Jimmy McCune.

The day started at the beautiful ½ mile in Oregon WI with 22 AVSS stars checking in to the pits and all racers were quickly getting a handle on the race track in the debut in the badger state for the winged warriors of the AVSS. The gigantic crowd was at the track to witness history and that is what was seen as all 21 qualifiers broke the existing track record by at least ½ of a second. The fastest racer in Madison history is Litchfield MI driver Jason Blonde as he lowered the old track record from 16.908 to a New World record time of 15.472! The young racer dropped the track record by nearly a second and a half and the slowest qualifier was a half-second quicker than that 1997 record set. Hank Lower placed the second quick time at 15.503 and third fast was Tom Fedewa at 15.524.

The drivers quickly adapted to the new track and that was evident in the three heat races as the action was heated with many two and three wide passes for the lead. The first drivers ever in Madison victory lane were the three heat winners and they were Jimmy McCune, Gary Fedewa and Tim Cox. The entire field of 21 cars was set to start the 30 lap main event.

The Wisconsin fans were treated to on track introductions and then the always-popular AVSS Frisbee toss. The drivers then buckled in for what the fans had been eagerly waiting for. The pole position went to McCune for qualifying tenth fastest, as that was the inversion for the main event and Jeff Bloom flanked him on the front row. The feature could not be started until the traditional three wide AVSS salute was given to the excited fans and the fans in saluting the drivers back with a gigantic cheer did a great job.

The feature started and the leader of the first lap was Bloom followed by McCune. The unfortunate luck award would have to go to fast qualifier Blonde as he crashed into Kevin Feeney and made contact with the back stretch wall. The cars of Feeney and Bloom were involved, though Bloom’s car had a blown motor and was not involved in the lap two crash. The unfortunate thing was Bloom’s night was over as soon as it begun as the early leader.

The race was restarted and Feeney’s crew was able to make repairs and rejoin the field. This gave the lead to McCune on the restart and he was to lead the final 29 circuits. This was not an easy victory as fifth place starter Bill Tyler was on the move and made several runs at McCune and even got along side of him at the 20 lap mark of the feature. The car of McCune was too strong after the driver made a slight wing adjustment and that was all she wrote as Jimmy McCune captured his first ever AVSS feature win. The famous car owner Benny Rapp was very excited for his rookie pilot and the entire Telegraph Brake and Clutch team was happy to be in the Madison victory lane. The Battery exchange and Abe’s Autoparts support the car.

The entire AVSS staff would like to thank the Filner family and everyone involved with the Madison International Speedway. Special thanks you goes out to Mark and Marie Carl for the feast of BBQ’d ribs after the races. The event was well received and the early prediction’s are for the AVSS to be back in the Dairy state for a two race weekend next year.

This Friday June 14th the world’s fastest short track show takes place with the stars of the Auto Value/Bumper to Bumper Super Sprint Series hitting the high-banked Toledo Speedway. A New World record time is likely as Toledo was repaved after last year’s incredible AVSS race there. The races begin with gates opening at one, time trials at 5:30 and racing at 7:30. The next day the AVSS cars will be at Auto City Speedway for the second show at that tricky 7/16-mile oval. The races start at 7:00 at Auto City Speedway on Saturday June 15. The official website of the AVSS is supersprints.com.