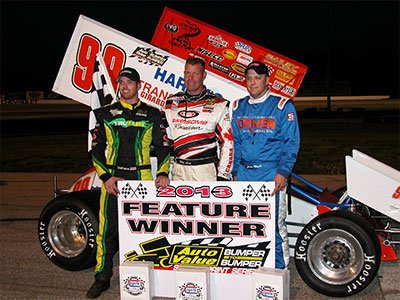 BIRCH RUN, Mich. (May 17, 2013) – Mike Ling from Mount Brydges Ontario, Canada made the most of his return to the seat of the Wayne Stickney owned #99 with an opening night win at Dixie Motor Speedway. The win would be his ninth in Auto Value Bumper to Bumper Super Sprints action, with the last win coming nearly one year ago in the same car.

Veteran drivers Tim Cox and Ling would bring the AVSS field out of turn four to start the 30 lap main event. The duo would race side by side heading in to turn one, but Ling used the high side to take the early lead. Third starting Troy DeCaire would follow suit taking the second position away in turn two.

As Ling and DeCaire set the early pace, the battle for third would set the stage for the intense racing action throughout the race. Kevin Feeney would pull even with Tim Cox on the fourth circuit, taking the position with a high side pass in turn four one lap later. At the same time, eighth starting Jason Blonde was moving his way to the front of the field.

By the ninth circuit, Blonde had closed in to challenge for the forth position, taking the spot in turn four. One lap later, Blonde would take third from Feeney in heavy lapped traffic. While Blonde was working his way to the front, DeCaire managed to close in on the race leader as they worked the lapped traffic.

As the checkers flew, Ling would grab the win with a quarter lap lead over DeCaire in second. Blonde faded slightly at the end in third, followed by Feeney, and Cox in the top five.

In Hamilton Trucking qualifications, Jason Blonde would set the pace with a lap of 12.416 seconds at116 miles per hour. Tyler Underwood, Troy DeCaire, and Jim Swain would grab the heat race wins.

Up next for the stars of the Auto Value Bumper to Bumper Super Sprints, a trip to the famed ½ mile Berlin Raceway on Saturday, May 18th. Then the series will travel to the 3/8th mile speed plant of Kalamazoo Speedway on June 1st. For more information, log on to the official website at www.supersprints.com, or the facebook page at www.facebook.com/avbbss