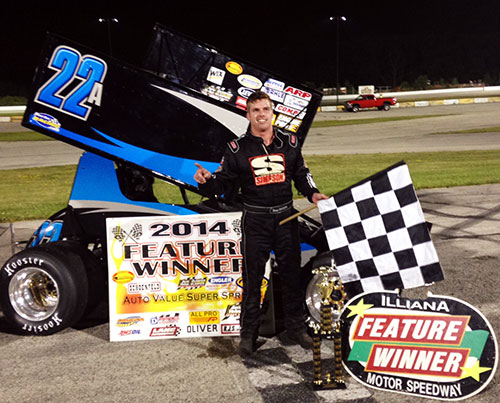 DeCaire completed the race winning pass on Jason Cox on the 20th circuit and then pulled away after a late race yellow for the victory with 15th place starter Jo Jo Helberg completing the podium finishers. Davey Hamilton Jr. and defending race winner Tim Cox rounded out the top five.

“After the day we had yesterday, my guys didn’t let me down. We woke up at 7 a.m. and had this thing on jack stands. We went through the car and hard worked really paid off,” said race winner Troy DeCaire. “They gave me a great car where I could just ride and watch Jason (Cox). He used his tires up a little bit and I made the move when it counted.”

The 30-lap feature began with Jason and Tim Cox pacing the 16-car starting field on the .50-mile oval. Jason Cox got the jump on his dad, and led the early stages of the race as Tim Cox settled into second with DeCaire advancing to the third spot.

At lap five, Jason Cox continued to lead as DeCaire moved to the runner-up position around Tim Cox with Kevin Feeney and Davey Hamilton Jr. close behind. Helberg was on the move, up from 15th to run in seventh spot after a pass on Joe Swanson.

DeCaire was able to close the gap in traffic on Jason Cox, but was using extreme patience to make a challenge for the race lead. While the duo remained one and two, Ryan Litt was on the charge climbing from his ninth starting spot to fourth after passing Feeney and Hamilton Jr.

Helberg then completed passes on Feeney and Hamilton to advance to fifth position. On Lap 20, DeCaire then pounced on Jason Cox while in heavy lapped traffic and grabbed the top spot after they had a spirited battle.

Once DeCaire was able to clear Jason Cox, he then edged away until the yellow flew on lap 23 for a spinning Sam Davis in turn 1. Under that caution period, fourth running Ryan Litt dropped out of the event and headed to the pit area.

DeCaire pulled away over the final seven laps to win over Jason Cox, who drove an impressive race in his first series start in almost 14 months. Helberg passed Tim Cox to finish in third with Davey Hamilton Jr. and Tim Cox rounding out the top-five finishers.

The Auto Value Bumper to Bumper Super Sprints returns to action on Sunday, August 31 at Angola (IN) Motorsport Speedway.