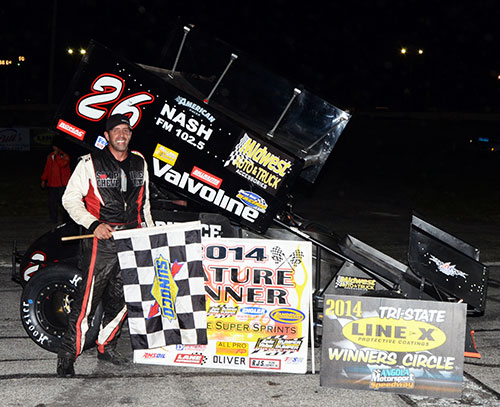 FREMONT, Ind. (August 31, 2014) – Aaron Piece earned a thrilling victory at Angola (IN) Motorsport Speedway in round 13 for the Auto Value Bumper to Bumper Super Sprints on Sunday, August 31 in the Jerry Carmen Memorial.

Pierce competed the race-winning pass on Jimmy McCune with 14 laps remaining in the 50-lap event and then drove to his first series victory of the season. McCune finished 0.789 seconds behind the race winner with Geoff Kaiser finishing in third spot, after an impressive drive from his 12th starting position. Sixth-time series winner Jo Jo Helberg crossed the line in fourth with point’s leader Jason Blonde rounding out the top five.

The 50-lap feature began with Kevin Feeney and Blonde leading the 20-car starting field to the green flag. In the early stages, Blonde grabbed the lead with McCune in second spot and Feeney in third. On the third circuit, McCune got around Blonde to take the race lead.

Racing action was halted on lap 13 after Teddy Alberts and Sam Davis made contact, bringing out red flag conditions. Both drivers were finished for the event.

When racing resumed, McCune led Blonde, Troy DeCaire, Pierce with Geoff Kaiser rounding out the top five. Neuenschwander was scored in sixth with Helberg, Feeney, Turnbull and Jerry Caryer filling out the top 10.

At the halfway mark, Pierce got around DeCaire and Blonde to advance to the runner-up position behind McCune.

The final caution waved on lap 32 when Turnbull spun in turn 2.

Prior to the caution, McCune and Pierce were putting on a great battle for the race led. Behind the front two included DeCaire, Kaiser and Helberg. Sixth was Blonde followed by Neuenschwander and Feeney.

Four laps after the restart Pierce took the lead on lap 36 and then drove to victory with McCune in second spot and Kaiser finishing in third. Helberg and Blonde rounded out the top five finishers.

In preliminary action, heat race victories went to Helberg, Pierce and Kaiser. In Hamilton Trucking Qualifications, Troy DeCaire posted the best lap of the 25 cars on hand with an official clocking of 12.236 seconds at 110.330 mph.