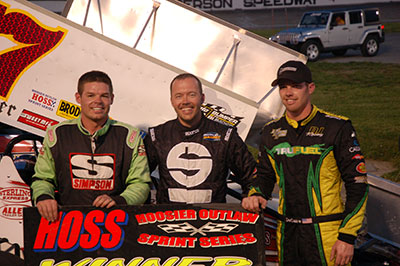 For Kaiser it was his third career win at Anderson Speedway, having won HOSS winged sprint features in 2012 and 2008.

Kaiser was first chased by Kyle Feeney, who was passed by Joe Swanson on the eighth circuit with an inside move entering turn three.

Swanson cut into Kaiser’s lead when the race’s only caution flag waved on lap 20 when Ryan Myers spun in turn two.

On the restart Kaiser pulled away to win by four-tenths of a second over Feeney with Troy DeCaire finishing third.

“The car was put together last night,” Kaiser said of the winning car provided by the Swanson team. “We were still working on the car when we got to the track.”

DeCaire was fifth after the first lap and moved into the top three after 20 laps.

Fast qualifier Aaron Pierce started seventh in the feature, but missed on the set-up and finished eighth.