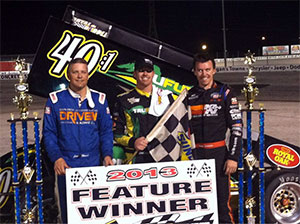 TOLEDO, Ohio (June 14, 2013) – The World’s Fastest Short Track Show lived up to its name through five heat races and 70 laps of feature racing with the caution flag only shown twice. A large field of 24 sprint cars was on hand to challenge the high speed .50-mile of Toledo Speedway on Friday, June 14. However the high banks of Toledo took their toll on equipment early, as two machines would see their night’s come to an abrupt end in hot laps.

In Auto Value Super Sprints, Jason Cox broke an axle sending the car skidding hard into the turn four wall. Jason walked away from the wreck but be done for the evening. Hank Lower lost an engine in hot laps ending his night as well.

In qualifying, eight drivers broke into the 12 second bracket with a ninth car of Tom Tolbert .008 seconds short of the mark after scrapping the wall just prior to crossing the line. The honors of being fastest went to Cody Gallogly at 12.592. For Gallogly it was the first time in 410 sprints taking fast time. Jason Blonde and Jimmy McCune were second and third quickest around the half mile.

In heat races it became clear that track position would be a crucial factor as those starting up front would have a clear advantage over those further back. In heat one, Troy DeCaire made a breathtaking three wide move to the high to pass the first two rows of cars on the first corner to taking the lead. He would never look back capturing the win with Kyle Feeney and Kevin Feeney rounding out the podium.

In Heat two, Tyler Underwood passed Jeff Bloom on lap five to take the heat win, Bloom finished second with Ryan Gibbs in third.
In heat 3, Darren Roberts jumped to a big lead from his outside front row starting spot and claimed the win. Frank Neil placed second after also starting on the front row and Joe Swanson flashed across the finish line in third position.

For the 30-lap feature an eight was rolled on the invert dice, placing Aaron Pierce and DeCaire on the front row. At the drop of the green flag, DeCaire charged into the lead with Pierce close behind. Pierce began to apply pressure to DeCaire on lap four as the two separated from the rest of the pack.

The only caution period took place on the eighth circuit when Kyle Feeney spun with a flat tire. On the restart Blonde began his surge forward sailing by the outside of three cars, going from sixth to third. DeCaire pulled away from Pierce in lapped traffic as Blonde closed the gap to make a bid for runner-up finish by the 19th go-aroundBlonde made the pass for second with four laps remaining, but it was too late to overcome the lead that DeCaire had constructed. At the finish, DeCaire finished 6.616 seconds ahead of Blonde with Kody Swanson in third. Mccune and Gallogly completed the top-five finishers. Pierce faded in the final three laps coming in sixth.

A nod should also be given to Underwood who started in 14th position and made a charge through the pack in the early laps making several three wide passes. His results not indicative of his effort retiring on lap 14.

McCune became the first driver to win both the sprint car and super modified features at The World’s Fastest Short Track Shows at Toledo Speedway. McCune won the ISMA Supermodified feature that was held before the Auto Value Sprint Series main event.