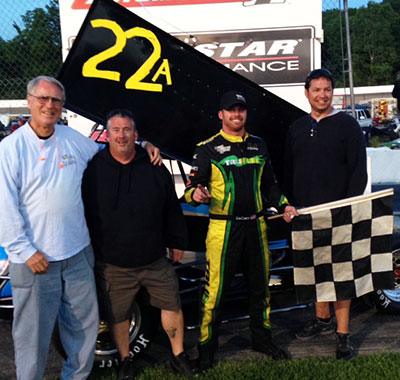 “We put ourselves in a hole with qualifying bad, but caught the inversion tonight. I was fortunate to be up front and put together 30 clean laps. The guys made some pretty big changes after qualifying and the car was a lot better. I almost felt bad starting up front with a racecar that was good during the race,” said feature winner Troy DeCaire

After a feature inversion of the nine fastest qualifiers, Kevin Feeney and DeCaire led the field to the green flag. After an initial battle with Feeney, using the outside lane DeCaire charged to the lead with Feeney settling in second spot with Cox listed in third.

On the fifth circuit, DeCaire was pulling away with Cox up to second with Feeney, Neuenschwander Blonde completing the top five. Just prior to the halfway mark, Helberg worked his way up to fifth position with a pass on Blonde.

At the halfway mark, DeCaire had constructed a straightway advantage over Cox as he then approached the tail of the lead lap with Geoff Kaiser, Aaron Pierce and Feeney battling hard for position.

As DeCaire was working the outside lane in a search of a way around, Cox cut down the margin and nearly closed right behind DeCaire as the battle for first position heated up. DeCaire was able to clear the tail of the lead lap and stretched the margin on Cox on his way to a victory margin of 2.097 seconds.

“I didn’t know how close Tim (Cox) was. I was forcing the issue with going up high to clear all three of them at once and got a little greedy and had to save the car. If I knew Tim was back there would have cleared them one at a time. M-40 is a fast track, key here is to keep in straight for all 30 laps,” added DeCaire.

The best battle on the track was for third position as Neuenschwander and Helberg were battling side by side and hard for the podium spot. Neuenschwander prevailed edging Helberg across the line with Blonde taking the fifth spot.

Heat race wins were claimed by Neuenschwander and DeCaire while Helberg was the Hamilton Trucking Fast Qualifier with a lap of 10.272 seconds at 131.425 mph.