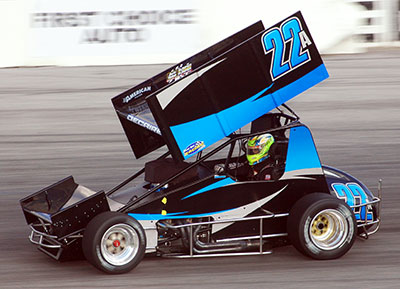 WINCHESTER, Ind. (July4, 2014) – Heading into Saturday night race at Grundy County (IL) Speedway, Tampa, Florida’s Troy DeCaire had finished second to Rohnert Park, California’s Jo Jo Helberg in the previous two King of the Wing Sprint Car Shoot Out events at Toledo Speedway and Winchester Speedway. Despite those two runner-up finishes to Helberg, DeCaire only found himself four points behind Helberg in the “King of the Wing” point standings. Throughout the night, each and every point was valuable to both these drivers for them to earn the coveted title of Midwest “King of the Wing.” For DeCaire, though, it would be a night to put away the frustration of playing the role of bridesmaid.

During qualifying, Helberg set a new track record with a lap of 12.701, completely destroying the former track record of 13.400 which was set during an Auto Value Super Sprints race in June of 2000.

“I’m always happy to get the track record,” Helberg said. “Honestly, the car didn’t feel all that good. I had to make a pretty serious change (on the car) right before qualifying, but it was cool to pull it off.” The accomplishment of setting quick time gave Helberg some much needed “King of the Wing” points. However, because of the inversion, Helberg would have to begin the 40-lap feature from the inside of row five.

Under threatening skies, which had caused a brief delay earlier in the night, the feature began with Madera, California’s Cody Gerhardt and Ottawa Lake, Michigan’s Dave Baumgartner occupying the front row. At the start, Baumgartner used his outside front row starting position to rocket to the point using the high line entering turn one. Baumgartner, who has extensive experience competing in midgets at Grundy County from the mid-1990s to the early 2000s used that experience to lead the first 13 circuits. Baumgartner has scored numerous second place finishes at Grundy County in his career, but has not yet gotten over the hump to earn his first victory at the track.

After a lap 13 spin by David Byrne into the infield in turn two, the rain began to fall again. This time, the precipitation was falling much harder and it appeared as if the moisture might put an early end to the night. However, after a 45-minute delay, the skies cleared up, the fans closed their umbrellas, and the sprint cars were pushed off to resume the final 27 laps of the feature.

On the restart, the running order of the top-five was Baumgartner, DeCaire, Gerhardt, Tim Skoglund, and Davey Hamilton, Jr., with King of the Wing point leader Helberg lurking in the sixth position.

At the halfway point, DeCaire closed the gap on Baumgartner for the lead. With 17 laps to go, DeCaire made the high line stick and motored around Baumgartner in turn two to take the top spot. At that point, it looked as if DeCaire might run away from the rest of the pack. With Helberg stuck in heavy traffic back in sixth place, the question on everyone’s mind was if Helberg could gain enough spots to take home the Midwest “King of the Wing” title over DeCaire.

Helberg was able to slice and dice his way up to third place with less than 10 laps to go to. The pace was torrid and the cars so close that any mistake while dealing with lapped traffic could be a driver’s undoing. Baumgartner was able to put some pressure on DeCaire in the final laps, but did not have enough to get by the 28-year old sprint car champion. DeCaire took the checkered flag in front of a sizable, dedicated crowd who stuck it out to the end despite the multiple rain delays.

Rounding out the top ten behind DeCaire was Baumgartner, Helberg, Hamilton, Jr., Shane Butler, Gerhardt, Skoglund, Byrne, Davey Hamilton, and Grant Galloway. Despite two second-place finishes and a victory in the three-race series, it was still not enough to defeat Helberg. By virtue of his third place performance and accumulating enough points through qualifying, heat races, and the features in the three races, it was enough to earn Helberg the title of Midwest “King of the Wing” by a single point over Troy DeCaire.

Despite the victory, DeCaire admits that tracks such as the .333 mile oval of Grundy County Speedway are not his forte.

“I’ve traditionally struggled on the short tracks. I’ve always been a half-mile guy. I think that comes from go-karts and not learning how to run a brake pedal so well,” DeCaire said. When the guys give you a car like they gave me tonight, it really makes it a lot easier. We’ve had a car like that all weekend, but we’ve been on my types of tracks on the half-miles. I never thought I’d come from the eighth (starting position) on a track like this and win.”

After hot laps, Helberg indicated that he was still searching for a second groove. Helberg used the high-line to take the victory at Winchester the night before and was looking for the high line to develop sooner rather than later at Grundy County. Throughout the 40-lap feature, Helberg was able to gain more positions than anybody else. After the feature, he spoke about how he had to take advantage of other driver’s mistakes and use lapped traffic to make his charge from ninth to third.

“There was somewhat of a second groove,” Helberg said. “If I could drive it in real hard and out-brake them right in the center (of the turn), it would pay off. Once I showed them a nose, I could complete the pass. I started arching in a little bit late on the high side to get a run coming off underneath. I either had to do that or I’d wait for them to make a mistake or get into traffic. I think I took advantage of a couple of mistakes people made, but all the other passes were made the hard way.”

The King of the Wing Sprint Car Shoot Out resumes on November 21, 22, and 23 when the series heads out to California for a three-race set at Madera Speedway, Irwindale Speedway, and Kern County Raceway Park.