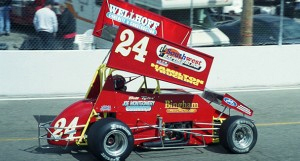 FREELTON, Ontario, Canada (July 7, 2002) – The Auto Value/Bumper to Bumper Super Sprint Series made history again as the group visited Flamboro Speedway in Freelton Ontario for the first ever time.

The driver who has the honors of being the first ever AVSS feature winner at the racy 1/3-mile oval is Parma MI racer Bill Tyler. The second win of the season for the new AVSS point leader.

The day started with 22 winged warriors of the AVSS checking the track out with hot laps and then history was to be made when qualifying began. The driver who holds the distinction of being the fastest racer ever at Flamboro Speedway is Mooresville IN driver Rick Baker. The Julian Construction car went a blistering 13.89 to set a New World record at Flamboro. The second fastest driver ever at Flamboro is Dorman Snyder at 13.97 and Jimmy McCune was third at 14.00.

The three heat race winners in front of the gigantic crowd were Dennis Craft, Sean Stafford and George Gustafson taking his first AVSS checkered in quite some time. The B-main went to Bill Tyler.

The 30 lap main event was lined up with Bill Tyler and Gary Sherman leading the 21 car-starting field to the green. The race could not start with out the very excited crowd seeing the beautiful AVSS three wide salute to the new sprint car fans.

The race started with Tyler quickly taking the lead and a quick yellow happened on lap three when Hank Lower, Kevin Newton, Gustafson and Tracy Rice got together on the back stretch and caused the only caution of the feature.

The race was restarted with Tyler in front and the driver of the Southwest Trailers, Hamilton Trucking, Larry Bingham number 24 was not to be headed as he lead all 30 laps of the main event. There were several incredible battles for position throughout the field and Sherman tried to close the gap on leader Tyler on several occasions, but could not complete the pass.

The entire staff of the AVSS would like to thank John Casale and his great people at the track for all of their help and wish them a very successful season. The AVSS website is supersprints.com and the AVSS get next weekend off before returning to action at Kinross International Speedway on Friday July 19. This will be the debut of the winged warriors at Kinross and will most likely set a new track record there. The next evening at Auto City Speedway in Flint MI the AVSS will return for the second time in 2002. See you at the races and have a good weekend off.