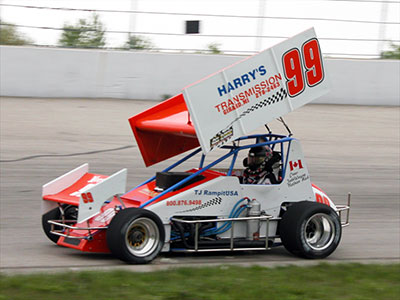 FORT WAYNE, Ind. (May 11, 2013) – Mike Ling did it again. He took the lead on the opening lap of the Auto Value Bumper to Bumper Super Sprints feature event, and went on to claim victory. This time at Berlin Raceway, and this time he had to fight for it.

Ling, and Tim Cox would lead the field to the green flag for the 30 lap A-main. The front pair raced side by side in to the first turn, with Ling gaining the advantage as they came out of turn two. Bill Tyler would settle in to third, with Tyler Underwood close behind. The car on the move early was Jason Blonde who moved up two positions on the opening in to the seventh.

By the fifth circuit, Ling had built a comfortable lead, with Cox, and Tyler also pulling away from the rest of the field. Blonde continued his march to the front, taking over the sixth position. One lap later, Ling entered lapped traffic, but the veteran quickly made his way through the cars.

On the tenth circuit, Blonde would pass Kevin Feeney to take over fifth, but a caution would erase the pass. This would bunch the field back up, and place a few lapped cars among the leaders. On the restart, Blonde would slip past Feeney one more time, and quickly went after Underwood in the fourth position. As Blonde and Underwood raced for position, Underwood would get loose allowing Blonde, and Feeney to pass by.

One lap later, Blonde would also get by Tyler to take over third, and set his sights on Cox in the second position. Just a couple laps later, Blond would catch the runner-up Cox, and make the pass in turn two. Feeney had caught Tyler, as those two fought for fourth. It would not be long before Blonde would catch the race leader, and make a bid for the spot in heavy lapped traffic. As the front duo entered turn three, Ling would dive to the bottom of the track to pass a lapped car, but Blonde would equal the move on the top-side, splitting the lap car. Blonde would use the top side to take the lead by a nose at the flag stand.

Ling would not give up however, and fought back on the bottom of the track, retaking the lead on the next lap. One lap later on the 17th circuit, Blonde would again claim the top position with a daring 3 wide pass one again in traffic. Blonde would then lead the next three laps, pulling away from the rest of the field. On lap 20, Blonde went to the top of the track in turn three to pass a lapped car when the caution would wave for debris. At the same time, Blonde and the lapped car would both get loose, causing Blonde to come to a rest in turn four. This would hand the lead back to Ling, and move the hard-charging Blonde to the tail.

Over the final 10 laps, Ling would pull away, but all eyes were on Blonde as he moved back through the field. He quickly moved back in to the fifth position behind Swanson. Swanson, however, was the fastest car over the final five laps. With just three laps remaining, Swanson would pass Feeney for third, then would take over the runner-up spot on the white flag lap.

Ling would cross the line first taking his second win, in two nights. Swanson was second, with Cox, Kevin Feeney, and Blonde in the top five. Tyler, Hank Lower, Kyle Feeney, Underwood, and Mike Astrauskas would round out the top 10. Blonde set fat time during Hamilton Trucking qualifications, and missing a new track record by a mere 66 thousandths of a second. Blonde, Tyler, and Ling would take the heat race wins.

Up next for the Auto Value Bumper to Bumper Super Sprints, is a trip to the 3/8th mile speed plant of Kalamazoo Speedway on June 1st. For more information, log on to the official website at www.supersprints.com, or the Facebook page at www.facebook.com/avbbss