Who is going to beat Bobby Santos III in the King of the Wing series? 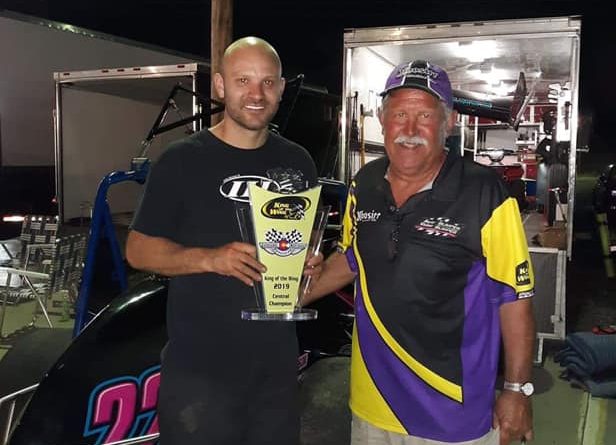 Who is going to beat Bobby Santos III in the King of the Wing series?

Last November Santos traveled to California with his crew and car owner Richard Fielder to Irwindale California on Saturday and Kern County on Sunday to sweep the Southwest series of the KOTW.

Move forward to April of 2019, Santos travels to Pensacola Florida’s 5 Flags Speedway and Montgomery Speedway In Alabama to sweep his second weekend. Giving him the perfect start to both the KOTW and AVBBSS opening winged Sprint car season.

This past weekend Santos and company goes to the second of 4 shows on the national tour and sweeps the weekend at Colorado National Speedway.

The 15, and defending 2018 KOTW series champion Eric Humpries of California has been trading fast qualifier positions with Santos on each of the weekends, but just hasn’t had the right combination on the track to reel Santos in for the 2019 season.

The second night of the Colorado National Speedway show had a crowd of 10,000 fans watching as Humpries earned the fast qualifier for the second night in a row with a 13.542, 2 tenths of a second faster than his Friday night fast qualifier. Second qualifier was Santos at 13.869 and Tristen Spiers at 14.074 rounding up the top three.

In the CSI heat 1 Bryan Gossel had the pole position and kept that led through an 8 lap, 2 minute and 3 second race that had the fans on their feet wanting more action. Humpries and Kyle Bergener completes the top three.

The MPI heat 2 had Cris Muhler on the pole who also kept his pole position and maintained that lead in the 2 minute 4 second race. Austin Carter and Santos followed Muhler across the line.

The Hoosier Main event had Mike Anderson of Idaho on the pole after two disappointing trips to California and Florida/Alabama where he was plagued with engine problems after long travel to these events. Anderson was unable to finish in the Friday night show and was hungry to have a good showing for this show.

Santos was starting ninth and Humpries tenth after a 10 was drawn for the invert placing a lot of fast cars between them and a trip to victory lane in the 40 lap feature.

A third lap caution after the 43 of Kyle Bergener lost a left rear and hit the turn 3 wall after Santos and Humpries had worked up to 5th and 6th respectfully.

But the 8th lap caution would change the line up drastically as Humpries tangled with the 24 of Hunter Stanley placing both on the tail of the restart.

The restart had Bryan Gossel leading followed by Cris Muhler, Santos, and Austin Carter. In lap 9 Santos maneuvered around Muhler and Gossel taking the lead for the rest of the race.

Gossel maintained his 2nd place position through the last few yards to the checkered flag when Carter was able to slide in front of Gossel by 8/1000th of a second to claim the second place position.

Humpries made a valiant attempt to get back to the front of the field moving from 14th to 5th position but just simply ran out of laps to get him to victory lane finishing just behind Muhler.

The next weekend for the KOTW will be Meridian Speedway in Idaho September 20-21. Will Santos continue his winning streak in the 2019 season, or will Humpries get his first win as defending champion, or will their be a completely different driver that emerges in the field to claim the Northwest King of the Wing Champion.