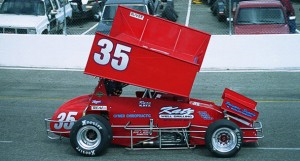 TOLEDO, OHIO (June 14, 2002) – The fastest short track race in the world was held at Toledo Speedway Friday June 14th and Battle Creek MI racer Ryan Katz was the victor for the Auto Value/Bumper to Bumper Super Sprint Series portion of the program. The races run at the improved ½ mile speedplant included the AVSS and the ISMA supermodifieds in what was billed as the fastest short track show in the world and the fans did not leave disappointed.

The Auto Value/Bumper to Bumper Super Sprint Series had 27 cars on hand for the record making night and after practice it was evident that records were going to be broken as the track was repaved midway through last season after this show was run.

The AVSS qualifications were extremely exciting and the fastest sprint car driver ever at Toledo Speedway is now Litchfield MI driver Jason Blonde who qualified at an amazing 13.387. That is an average of over 135 miles per hour. The runner up in qualifying was current point leader Tom Fedewa at 13.462 and Bill Tyler was third fastest at 13.522. The top four qualifiers broke the existing track record of 13.57 and seven supers broke it as well.

The three heat races were incredible and the three victors were Doug Berryman of Fremont OH in his first ever AVSS race, Jeff Bloom and Gary Fedewa. The B-main was scored by Hank Lower over Tim Cox, Dorman Snyder, Troy Underwood and Dean Best. The Lane Automotive/Aeroquip/Hamilton Trucking provisional was awarded to Rick Baker.

The 21 car starting field was now set and with the threat of rain in the area the cars were quickly pushed off and the three wide salute to the huge Toledo crowd was a great start to the 30 lap main event.

The front row leading the field to the green flag was Ryan Katz and Tim Cox. The start was very smooth and Katz was the early leader with Cox following. The feature ended up going green to checker with no caution flags being thrown. The action was heated throughout the field as Tom Fedewa was moving quickly through the pack from his fifth starting position and on lap 17 passed Cox for second and had serious intentions of passing team mate Katz in the final dozen laps. The two drivers of the Katz Well Drilling team sliced their way through lapped traffic and at one time T.Fedewa closed with in a couple of car lengths.

This was to be as close as T.Fedewa would get as Katz was not to be headed in picking up his first AVSS feature since September of 2000 at Auto City Speedway. The very excited driver thanked his father Mike Katz in the Toledo victory lane and with teammate Tom Fedewa taking second it was a very happy evening for the Katz racing team. The remainder of the top ten were Cox third, Blonde 4th, Lower 5th, Kevin Feeney 6th, Tyler 7th, Dennis Craft 8th, Mike Ling 9th and Gary Sherman 10th. The Suspension Spring Specialists racer of the night award went to Rick Baker who started 21st and finished 14th and that was with getting to the track at 6:00. The Grace award for the second consecutive week for finishing 15th goes to Doug Stepke. The SSS award at Madison was earned by Troy Underwood, which was something I had forgotten to include in last week’s story.

The entire AVSS staff and all race teams would like to thank the crew at Toledo for their hospitality and we all look forward to the fastest show in the world again next season. The official website of the AVSS is super sprints.com. The next week the stars of the AVSS get a rare weekend off and the next event for the AVSS is at Berlin Raceway in Marne MI on Saturday June 29. This will be a memorable night as Johnny Benson JR will be competing in the Late Model portion of that program along with the great field of AVSS stars and cars.

The race scheduled for Auto City Speedway on Saturday June 15 was rained out and not rescheduled. The schedule conflicts between the series and the track just does not allow for a rescheduled date. The AVSS has three more programs at Auto City yet to come. The next being July 20th. The staff of AVSS say enjoy the weekend off at see everyone at Berlin Raceway.

A-main 30 laps went green to checker in under 10 minutes!