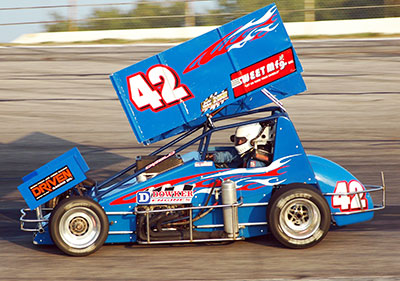 The 30-lap feature began with Brian Gibbs and Frank Neill leading the field to the green flag in the season finale for the 19th season of racing for the Auto Value Bumper to Bumper Super Sprints.

After the competition of the first circuit, fourth starting Jason Blonde charged into the first position and began to pull away in the early stages of the race. Behind the race leader were Neill and Kevin Feeney.

While Blonde was extending his lead, Jo Jo Helberg moved up to second with Davey Hamilton Jr. in third. Ryan Litt and Aaron Pierce rounded out the top five.

At the 12-lap mark, Blonde’s lead was 2.566 seconds over Helberg. On a couple occasions, Helberg was able to close the gap on Blonde, but when the checkers flew on the caution free event, Blonde earned the feature victory.