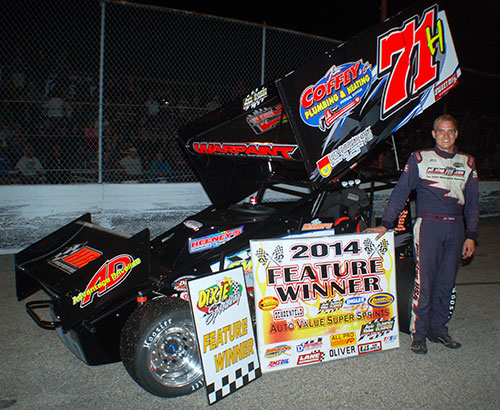 Helberg powered around the outside of Davey Hamilton to take the race lead on the fifth circuit and then dominated the final 25 circuits. He was chased across the finish line by Canadian Ryan Litt with Florida’s Troy DeCaire making a last lap pass on Hamilton for third position. Davey Hamilton Jr. filled out the top-five finishers.

“The car wasn’t that good on the bottom in the early stages, but it was working really good on the top. I re-grouped after the yellow and gave it everything I had on the outside. You can go all out on these Hoosier Tires in 30 lap races,” said race winner Jo Jo Helberg.

The 16-car starting field charged to the green flag with Hamilton getting the jump and pacing the opening laps as DeCaire settled into second spot and Helberg drove into the third position. The lone caution waved on lap 4 when Jerry Caryer came to a stop in turn 3.

On the restart, Helberg made quick work on DeCaire using the outside lane to advance to second position and stayed up high to bypass Hamilton for the top spot. Once out front, Helberg began to construct a sizeable margin.

At the 10-lap mark, Litt drove into third around DeCaire and three laps later passed Hamilton for the second spot. Litt was able to close on Helberg in lapped traffic, but once Helberg got passed John Turnbull Jr., he was able to distance himself from Litt.

At the checkered flag, Helberg pulled away to earn his seventh Winged Sprint Car feature of the season while Litt posted his second top-two AVBBSS finish of 2014. DeCaire earned his second straight series podium with Hamilton and Hamilton Jr. filling out the top five.

The Auto Value Bumper to Bumper Super Sprints return to action on Saturday, August 2 at Illiana (IN) Motor Speedway.